Rebellion Is in Fashion: Ersatz Couture and Avant-Garde Design in East Berlin

Marco Wilms was just 15 years old in 1981 when East German police identified him as a “potential enemy of the state” and kicked him out of school. Without a diploma, art school was no longer an option. He was assigned a job in a fishhook factory, getting up at 6 a.m. every morning for three years, and fantasizing about escaping the socialist experiment he’d been born into. Decades later, he would find that escape as a clothing model, and later, as a documentarian chronicling East Germany’s unique underground fashion scene.

East Germany, aka the German Democratic Republic (GDR), was a socialist "worker's" state where factories and food supplies were owned "by the people" but tightly controlled by Communist Party insiders. Conditions were so bad that 4.5 million people fled west, even though escape was illegal and punishable by death. A wall was eventually erected to keep East Germans in—the Berlin Wall. Amid starvation and constant shortages, people did extraordinary things to survive and continued to create art. The raucous, rebellious beauty of illegal fashions fed East Germans’ need for creativity and individuality under a government that controlled every aspect of life.

Clothing—not to say fashion—in East Germany was produced by the government and available to all citizens of the GDR. The state owned garment factories and employed designers. The German Fashion Institute dictated the clothing that would be available, organized fashion shows “promoting a clothing culture connected to our national cultural heritage.”

The government also printed a fashion magazine called Sibylle, and coveted copies passed from friend to friend until they fell apart. But the clothing in the magazine and the fashion shows wasn’t available to buy in East Germany. Sibylle instead featured patterns to sew the garments yourself—provided you could find the cloth. Marco Wilms was one of the GDR’s top models, a vibrant, youthful body juxtaposed against backgrounds of a decaying, graying East Germany.

State-produced clothing was available in state-run stores, but it was poorly made, drab-colored, ill-fitting, and exclusively synthetic. For a few years, it was all made of "Vliesett," a nonwoven polyester that felt like a paper tablecloth and fell apart after a few washes. 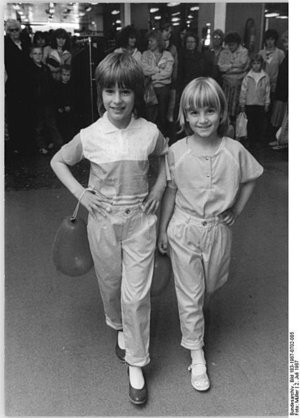 East German laborers were making quality fabrics and fashionable, ready-to-wear clothes in East German factories, but exclusively for export. By using low-wage, forced, and prisoner labor and selling to the West, the East German government brought in currency to keep the government running.

Communist-approved, state-run “Exquisit shops” offered pricy, slightly more fashionable goods to those who could afford them. A single pair of trousers or a blouse would cost an average workman a month’s wages. The elite and especially fashionable could hire a seamstress or tailor to have clothes custom made, but these options were out of reach for most citizens.

Ersatz is a German word for an inferior substitute, a fake version of something. Coined in the 19th Century, its usage exploded in the 1940s and 1950s, as the economic situation in East Germany became more dire, and individuals had to get more inventive to obtain what they wanted. East Germany was most notable for its chronic shortages: every kind of product was rationed. Waitlists for luxury goods like cars could be years long, and even daily staples like bread and toilet paper required hours of waiting in line.

GDR teens who couldn’t get fashionable clothing bought bedsheets, then dyed them and sewed them at home. They used furniture upholstery to make jackets and skirts and lined them with dish rags. Every home had a sewing machine, but cloth, thread, and buttons were precious. Using fashion for self-expression was considered suspect by state police.

Young people embroidered and crocheted, and painstakingly deconstructed old clothing before turning it into something new. But this self-expression was tightly controlled by literal fashion police.

Jeans were an icon of rebellion. Five-pocket blue Levi's were especially coveted. Young people smuggled from them from the West or bought them for cash off the legs of tourists. Jeans were artifacts of a freer world. Police targeted "riveted pants" as representing criminality and decadence.

At the fringes of the thriving DIY clothing community, a rebellious, avant-garde counter-culture emerged. Using whatever they could get their hands on, the couture underground took “make it work” to the next level. They used shower curtains, organ storage bags from hospitals, and the plastic sheeting farmers used to cover crops. From these industrial odds and ends, the designers created form-fitting, punk-inspired, over-the-top outfits.

Fashion shows were secret events, by invitation only, featuring original music as well as edgy clothes. Using fashion for self-expression was considered suspect by state police. Being spotted with pink or green streaks in your hair (achieved with a foot fungus cream available in government-run pharmacies) could land you in jail.

By the time Marco Wilms arrived on the scene in the 1980s, secret police had started to lose control over fashion conformity in East Berlin. He was one of East Germany’s top models and saw his participation as an act of self-expression. He told Time Magazine in 2009:

...Literally everything was limited. Every form of individuality or spontaneous act was demonized...The pressure of standardization, forcing people into line — we were totally against all those socialist diseases, We just wanted to be ourselves."

For an East German state determined to make youth into the orderly, uniformed future of socialism, individual self-expression was a threat to national security. But even facing persistent scarcity and totalitarian secret police, young people’s hunger for self-expression and liberty was irrepressible. In underground fashion shows and bent over their sewing machines, they stitched subversion into every seam. Through clothing, the fashionistas trapped in the GDR sought the escape of individuality, a rebellion against the state’s forced equality and conformity.

Dr. Laura Williams  teaches communication strategy to undergraduates and executives. She is a passionate advocate for critical thinking, individual liberties, and the Oxford Comma.